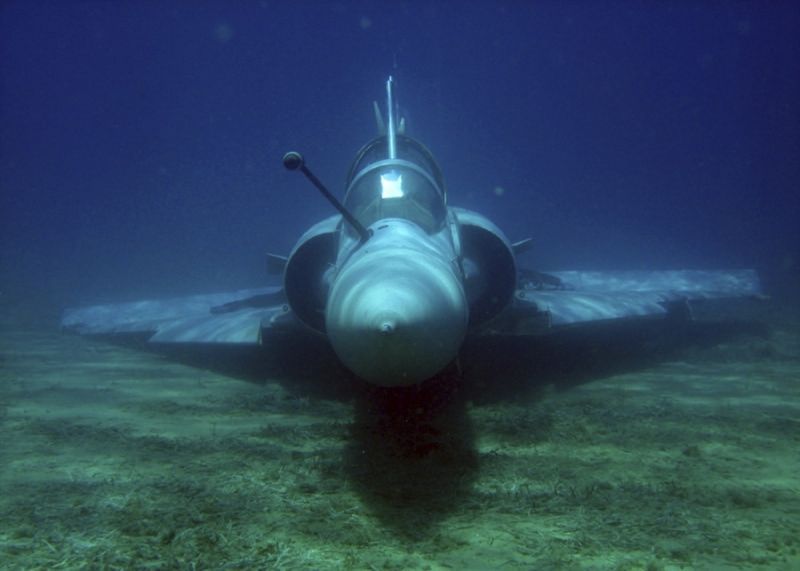 - Electric flight control :
---------------------------
- Slats : they have an automated movement, during flight, and are retracted when landing (but still can be reopened manualy in case of engine failure)
- SAS System Stabilizer Automatic Flight Stabilizer flight depending on the position of the joystick ( Still job to do to improve that )
Note : this make stick less sensitive for low stick value or high speed. Also work for the nosewheel : > 10kts it become more stable with speed increasing

- Nasal :
---------
- Centralization of "init" functions of the various systems , (to "revive" systems in case of faillure (real or simulated crash) and help "restart" management (in the future)) -> This still need to be improved
- More reviews in the party " missile.nas " ( <- Not Enough)
- Correction of some bugs in nav & radar

- Instrument/Alert :
--------------------
- Jettinson : Yellow and black button to drop the tanks in case of emergency ( I rebossé texture button) and ajjout a keyboard shortcut (Shift + J). This helps unlock the full keypad, and so those who use it for steering can be used without problems.
- HUD : Change the target display in the HUD : This overlaped and did not read all the infos. Everything is readable now.
- Stall Warning Alert + stall (On the HUD and on the alert panel)
- Transponder : Working transponder. Actually only the civilian part of the Transpondeur is working

-Other Stuff :
--------------
- Normalisation in order to make this aircraft available to "Aircraft_Selection_Criteria" (but not finished yet)

Moi même en fait... a écrit:We are currently working on the next release, and it will be come very soon.
On the change log you will find :
-3D/graphical stuff :
- added formation light (texture are photo I made when I went to the "Bourget Salon" and I made them GPL

- added animated air intakes. These kind of little trapdoor each sides of the semi circular air intake. The animation is actually based on real datas.
- The semi circular intakes have been reworked
- Rework on the tuyere animation. This is closer to reality.
- The joint between the tuyere and the fuselage have been reworked.
- The canopy have now a "semi close" position.
- The gear indicator, in the panel have been reworked : We can now see clearly the "3 greens" arrow when gear are locked down. (There is also Airbrake indication, breakes indication, and "gear not down, not up indicator"
- Rear ECM countermeasure have been added
- MFD have been reworked : they now have all the same font.
- Gear can no longer be retracted when the aircraft is on the ground
- New smoke added when touchdown
- New smoke added when engine is running : borrowed to the the Ja-37 (Thanks Necrolatis) this add an heat blur effect.
- New ALS flames have been added for after burner. With 3 differents flames : 1 for Day, 1 for Dusk and 1 for night. (Based on the visualisation of dizains of photo and video)
- lowered the number of particules on each bullet explosion : to much particules caused core dump and this was a serious issue.
- Intern light cone have been removed, then caused issue for some users.
- A SmokePod have been added

- Texture modification to be more realist
- Rework of the files named :logos.xcf.gz to allow easier creation. These logo allow high details Mutlipalyer visible logo that are totally indepedent of the general texture. That allow lower qulatity texture, with high quality logo.
- New liveries and rework of the existing ones
- New tuyere texture, based on photo I've made. (and it's GPL)
- New Splash screen

- Nasal/sytems
- New SAS systems.
So now the Stabilisation System correct the flight in order to
- Not exceed 9G when stick is pulled and speed >300kts
- Not exceed 20° aoa when stick is pulled and speed <300kts
- Not exceed 10° aoa when stick is pulled and speed <130kts and gear are out.
- Not exceed -3G when stick is pushed and speed >300kts
- Not exceed -5° aoa when stick is pushed and speed <300kts
- Not exeed 170°/sec in roll rate (actually should be 290 when no loads and 150 when there is loads under wings)
- Roll limitation have been added in order to avoid airbrakes spin, and make the aricraft more stable.
- Roll limitation when refuelling
- Roll limitation when stick is pulled.
- smooth added on elevator, depending of the aircraft attitude.
- Radar:
The radar have been totally recoded, in OOP. This took at least 2 or 3 months : Now we have :
- Range limitation
- horizontal azimuth field (With a possibility to change the center of the azimuth field for aircraft that have radar on rear or on side)
- vertical azimuth field (I will add after a way to change the vertical azimuth field by entering max alt and min altitude value, like we have on some other radar)
- Detect if the target is beyond the earth curves
- Detect if there is earth behind the target (with earth curves calculation). And if Doppler option isn't active, we can't detect target
- Detect an aircraft which have a determined closing speed, if doppler is activated. And allow radar to be notched when the target maneuver are made to avoid radar.
- Detect, if a target is behind the terrain or not. (this is the last testing done)
- Detect heat (actually with rpm or n1 value that are in multiplay)(This is actually for a future feature)
- Detect missile you shot and display them, on their way to target.
- Allow to detect or not AI aircraft.
- Allow to choose a target (or multiple target...not finished yet)
- Most of the value are recalculated with /position and /velocities properties, in order to prevent radar failure/crash due to ATC or strange AI things.
- Allow to detect a "GROUND_TARGET" which is an object created in the AI tree, and correspond to a spotting action.
Next feature:Allowing To radar object to discuss together, in order to put a radar object in a missile and then the parent radar should tell wich target to choose. That will allow semi active guidance or more evolued missile that have first a inertial guidance, and finally ends with an active guidance.
-Missiles
- All mirage 2000 reference have been removed.
- Ground detection have been corrected. Now missile do not go through mountains.
- Pylons position could be replaced by absolute position (relative to the aircraft), that will allow more flexibility.
- Preparation of the code in order to receive the radar object.
- All the step in order to fire a missile have been simplified (in code) that will allow more flexibitly
The flexibilty of this code will facilitate its integration in other aircraft.
- Guns :
When activated,a gun splash message indicate which target have been shooted. This code will be re-use to detect which target could have been hit by a ground missile/bomb, when aiming an object "GROUND_TARGET" that actually spot a MP player.
Gun shoot is also taken in account on the FDM. (At slow speed that actually shake the aircraft)

All indentation have been cleared, useless files deleted, the structure/tree of the mirage have been corrected/simplified.
New feature will also come before the next release, so this is not a definitive changelog. (And I may have forgotten some improves)
Also note the last release allow mirage 2000 user to have their loads (missiles, tanks) visible through multiplay. (Only the F14 have this feature). So having the last mirage version could also give you a better multiplay experience even if you don't use the mirage.